2nd weekend in April in Aptos

What is contra dancing?

Contra dance is a type of American folk dance done to live fiddle music. It is very beginner friendly; there's no fancy footwork, and a caller teaches and prompts the dances. It's also very difficult to describe, so check out this video. All our dances are called with larks and robins as the names for the two dance roles. That means you can dance with everyone. For a more comprehensive introduction on how a contra dance event is organized as well as hearing some contra dancers talking about dancing, check out this video.

Why Larks and Robins?

Inclusivity has always been one of our goals, and we believe that dance roles should not conflict with people's identities. For this reason our dances have never used Gents and Ladies as calling terms. We previously used Larks and Ravens, but learned that 'Raven' is a kinship group identity (moiety) of some indigenous peoples of the Pacific Northwest. After discussion with members of those communities and contra dancers around the country, we changed our terms to Larks and Robins.

San Francisco Bay Queer Contra Dance began with a kitchen table conversation among friends. Their conclusion: the Bay Area needed a friendly, folksy venue for queers and friends to meet and contra dance. So, in April 2004, "the little dance that could" sprang forth. While the original monthly dance has retired, the vision for the organization is still going strong. Queer Contra Camp, a weekend at Monte Toyon, a camp facility in the redwoods near Santa Cruz, debuted in 2008. The camp was a wild success, and now occurs annually in April. Circle Left began in January 2013 with the goal of specifically attracting young people and queer people. Our monthly dance is high energy and holds a strong sense of community. Hands Four started in April 2019. Some of us on the Peninsula have been crossing the bay to Circle Left every month over the years. To bring the same energy and spread the love of the community to our side of the Bay, Hands Four shares the same goal of attracting young people and queer people, and de-genderize dancing roles so that everybody can enjoy dancing with everyone else. 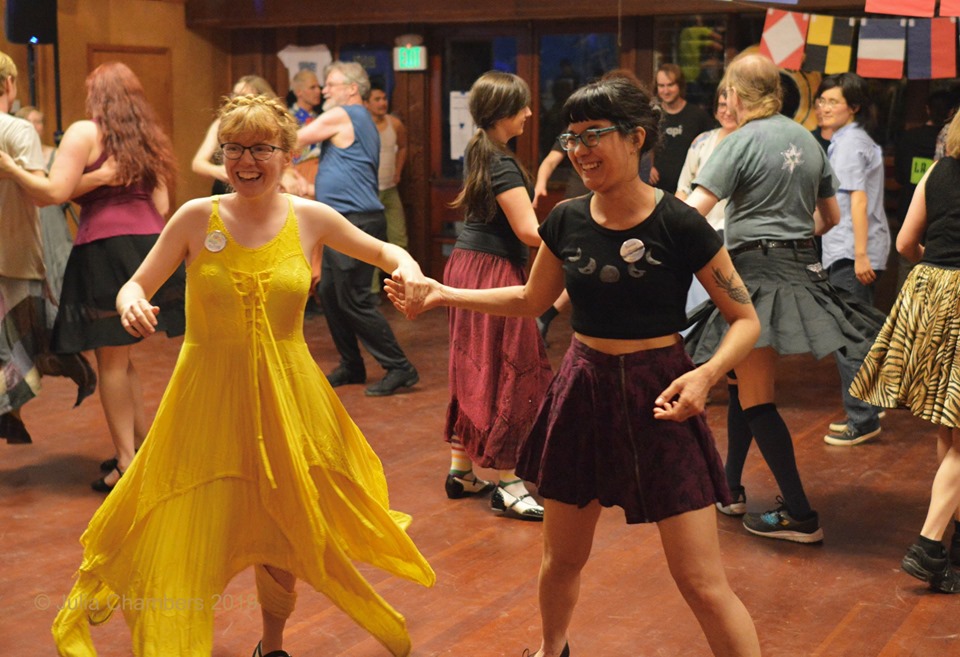 We want all people to feel safe and comfortable at Queer Contra Dance. We value and expect consent and communication, community mindness, and physical safety. Harassment of any kind won't be tolerated. If someone's behavior is offensive or harassing during the dance, we encourage you to speak with one of the organizers.

Please read our Values and Expectations if you would like to know more about our community norms and how we handle unwelcome behavior.

Please wear a well fitting N95, KN95, or other high-rated mask. You will be asked to show proof of vaccination, or bring a timestamped photo of a rapid test (or the test itself) taken within the last three hours. The hall's ventilation isn't ideal, but we'll do what we can, and there are air filters.

A few links to more in-depth discussions on how gender-free contra has been evolving in the queer and folk communty
Other Gender-role-free Dances in the U.S.

There are several contra dance groups across the U.S. which don't fuss about gender. Also check out the lists compiled by Jeff Kaufman for regular dances and longer events using gender-free terms.